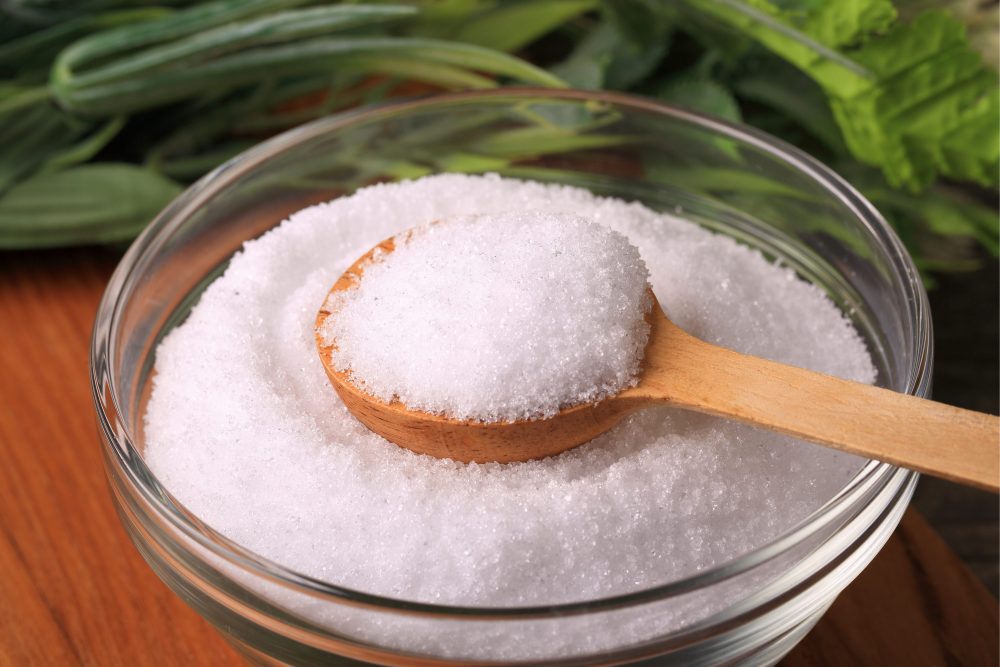 You’ve heard the name, you’ve seen it on the side of chewing gum packs, now it’s time to discover a lot more about one of teeth’s best friend: Xylitol.

It’s such a cool ingredient that instead of a usual top 5, I’m going to need a top 10.

Xylitol is from a friendly family of polyols. It has loads of little alcohol branches, hence the poly (=loads) + ol (=OH branches) name. And I promise that’s it for the organic chemistry lesson.

Where does it come from?

From… wood. It is in the name actually, xylos means wood in Greek, like in xylophone. And I promise that’s it for the etymology lesson. Xylitol used to be extracted from wood, but now it’s much more likely to be upcycled from other natural sources such as maize or wheat.

You can find xylitol in some fruits and vegetable, such as plum, strawberries, cauliflower and pumpkins. Who knew these four plants had anything in common?

What do we use it for?

Xylitol is a sweetener, and a useful one too. It tastes sweet but is only 60% of the calories of normal sugar and it can sustain heat, so it’s useful when you’re trying to make healthier sweets.

Xylitol has been used for the last few years for its very useful properties in the oral area.

It’s not absorbed by good bacteria, but mostly by the bad guy, Streptococcus mutans, who is responsible for cavities. The poor S. mutans think he’s eating a normal sweet, swallow it, and then try to digest it. That’s where it gets really wrong for him (S. mutans is a guy): it cannot digest it, so it goes in overdrive and literally explode. Xylitol makes the bacteria burst, and that’s extremely cool

How does it help your teeth?

It also helps remineralise teeth that have been attacked by S. mutans. Some studies show that it’s as effective as fluoride in certain cases.

It prevents bad bacteria to stick to your teeth and start a plaque club (more info here). It makes the plaque that already there more fragile, and easier to brush away. What a true little hero!

It makes you produce more saliva, which is helping dislodge bad bacteria and plaque. Oh, and fight dry mouth.

S. mutans got its name for a reason: it mutates. It seems that bacteria resistant to xylitol are on the rise.

Et voila, 10 cool facts on Xylitol! You will find this wonder ingredient in both our Toothpaste and our Mouth & Microbiome supplement.

Now test your knowledge in a Quiz